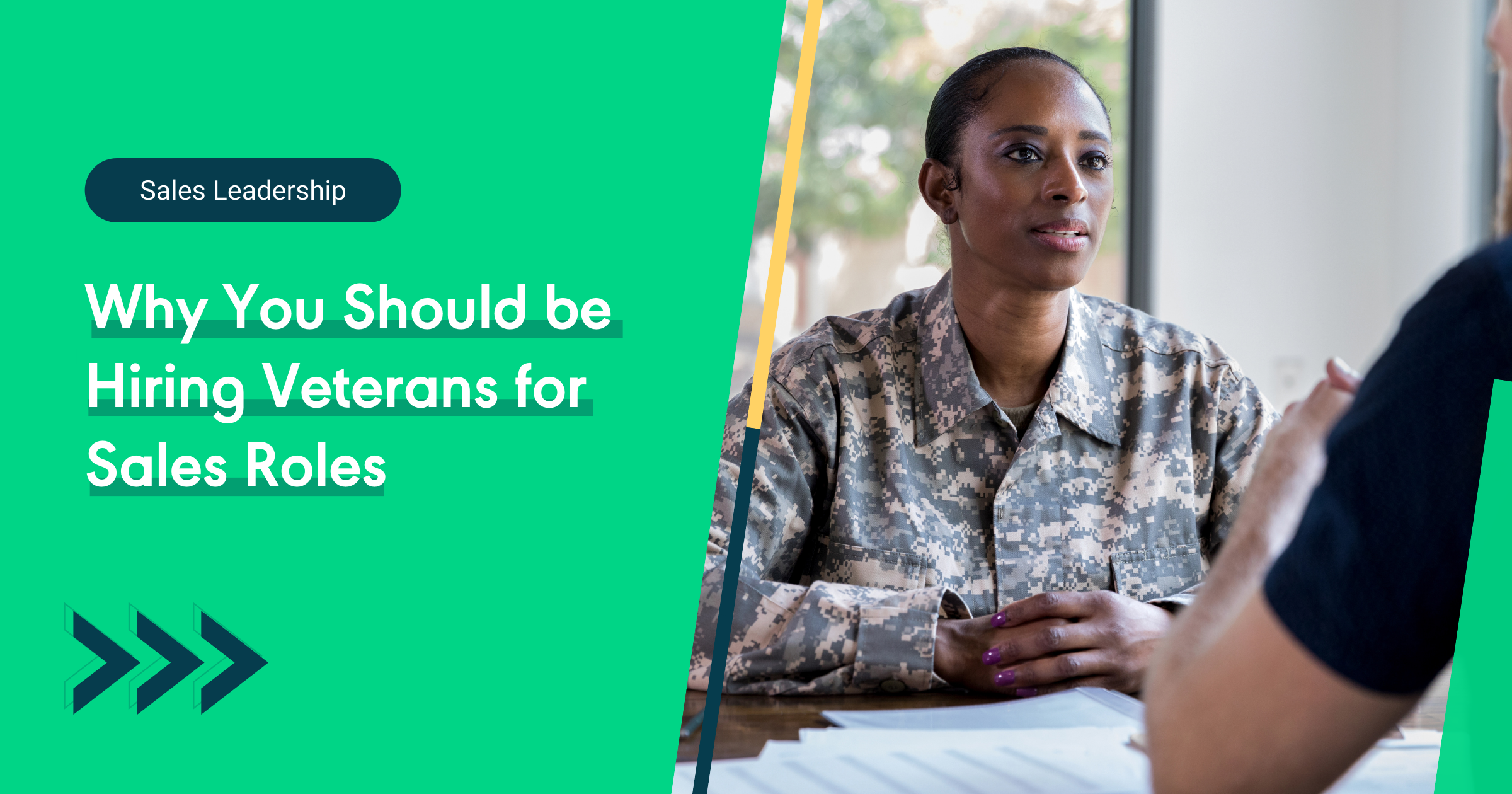 It’s an irony not lost on those who live it. Veterans who seek work after leaving the service often have a more challenging time finding and maintaining fulfilling and steady employment. A recent study by LinkedIn found that 33% of veterans are underemployed, meaning they either don’t have enough paid work or work that effectively utilizes their abilities. This underemployment rate is 15.6% higher for veterans than civilians, causing veterans to face an uncomfortable truth: that the country they fought to serve isn’t fighting as hard to serve them in return. The collateral damage of this oversight includes the sales industry. By and large, veterans have the determination, perseverance, and high caliber output required for success in a sales role. Sales leaders who work to bridge the hiring gap between veterans and sales roles are certain to gain a valuable addition to their company. Here’s why you should be looking to hire more veterans for sales roles and what you need to know about the process.

Sales Platoon: A Company Dedicated to Closing the Hiring Gap

The fact that veterans struggle to find employment after discharge isn’t new knowledge. Fortunately, there are individuals actively striving to change that paradigm. For Raleigh Wilkins, who spent eight years in the Marine Corps, the gap between veterans’ skill sets and employment possibilities presented an opportunity. Wilkins began working in sales a couple of years after he earned a marketing degree. He found the support for his role as an SDR underwhelming, especially in light of what the armed forces had shown him about his work potential. Through a combination of mentorship, sales experience, and self-tutelage, Wilkins rose to become the Senior Vice President of Sales and Sales Operations at a Chicago-based corporation. Wilkins’ 15 years of building teams taught him so much that in 2017, he established Sales Platoon: a training service that transforms high-potential military veterans into sales leaders.

The company offers a sales boot camp that’s unlike any other. Participants are trained eight hours a day, five days a week, for twelve weeks, in the science of sales. They learn how to transfer the discipline, determination, and resilience of their military background into a sales role. Sales Platoon coaches participants on how to use tools commonly found on the job, while also learning how to adapt from a military mindset to a civilian one. Graduates go on to land competitive and often high-achieving roles in the world of sales.

Bridging the Gap Between the Armed Forces and The Civilian World

“By the time [military personnel] are 19 years old, they’ve already gone through a rite of passage and some very, very high-level complicated training,” explains Wilkins, training that “most 19-year olds have never even thought about experiencing.” The intense level of responsibility that armed forces shoulder means that veterans also have “a moral compass that the average person is not ever held responsible for in the same way.” The self-sufficiency, determination, perseverance, and strong work ethic of veterans make them a valuable asset for any company. These skills translate exceptionally well to a sales role. The tenacity required for a full day of cold calling mirrors the work ethic found in the armed forces. The rigorous scheduling of military life can translate to the organizational skills necessary for SDR success. The responsibility a soldier assumes for their squad can be placed towards meeting quota. Given these beneficial overlaps, why don’t more companies hire veterans for sales roles?

The answer isn’t exactly simple. For one, certain biases exist against hiring veterans across many industries, not just sales. These unfortunate stereotypes work against the industry just as much (if not more) than they work against veterans. Another part of the answer lies in the disconnect between the military world and civilian life. Veterans, Wilkins says, “don’t necessarily know how to translate their skills, because nobody in the civilian world speaks military and the military doesn’t speak civilian….There’s no Rosetta Stone between the two languages.” By guiding veterans to “speak civilian” and redirect their considerable work ethic towards sales activities, veterans are empowered to excel. Graduates of Sales Platoon, for instance, often go on to become top performers and leaders in their organizations. Even those that may struggle early on often persevere to accomplish great things eventually. 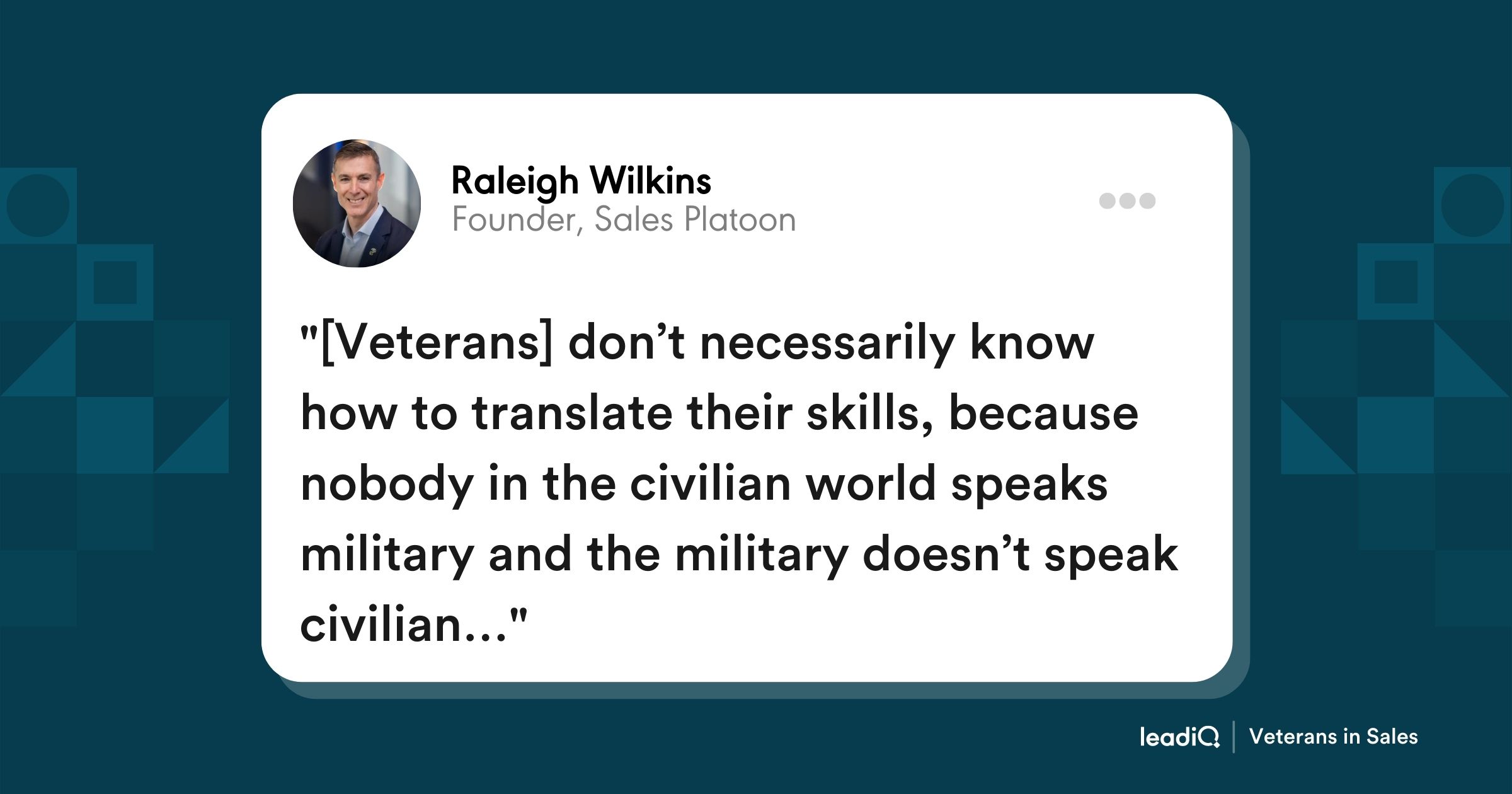 For instance, Wilkins recalls a tank commander who “knew very little about the business world. His entire life had been dirt and guns.” For the first nine weeks of training, he lagged behind everybody. “But in the last three weeks, he cumulatively beat everyone in points and became the ‘Honor Grad’ and the ‘Top Gun’ Grad:’” matriculate honors bestowed based on peer recognition and performance, respectively. By the time he was at his first job as an SDR for six months, he was at a 254% quota. Stories such as this one are both remarkable and common when considering the aptitudes of veterans for persevering, learning processes, and taking initiative–all skills exhibited by successful SDRS.

What Companies Can Do to Prepare to Hire Veterans

Given the obvious pros of bringing veterans into the sales workforce, what can companies do to make the hire? Here are some insights from Wilkins:

To learn more about Sales Platoons, check out their website. To gain insights on how the best way to train SDRs, visit the LeadIQ Academy or get in touch with one of our sales pros.