This is the second in a series on the SDR career path. In our first post, we spoke with an SDR  at LeadIQ and shared insights on her trajectory to becoming an Account Executive. This post shares the story of LeadIQ’s Director of Sales Development, Jamison Pence.

If you’re an SDR who is interested in becoming a sales manager, it’s helpful to know what to expect as you move up the ladder, and how to get there. LeadIQ sat down with its Director of Sales Development, Jamison Pence, to hear tips straight from the source. Jamison works with LeadIQ’s SDRs to ensure that they’re fully equipped and empowered in their day-to-day responsibilities, as well as their career paths. While no two paths are the same, it’s probably no surprise that Jamison started his career as a sales rep.

For five summers in his college years, Jamison went door to door selling educational books. He found this on-the-ground experience was “a good way to cut your teeth and get exposed to sales and the sales process.” After graduating, Jamison moved upwards and onwards to work as an SDR at a company in New York City. He worked for two other companies before landing at LeadIQ in his current position.  “I love the business development side,” says Jamison of his current role. “I think it's one of the hardest working groups in the company.”

So what made Jamison realize that he was cut out for this work?

Skills and Traits Every SDR Manager Should Have

Jamison’s work as an SDR gave him the time and experience he needed to discover his strengths. Here are the qualities he drew upon and honed as he moved up the ladder.

Organizational skills: Some of the best advice Jamison ever received was from a mentor who showed him the importance of building a process. “Build out a process that everybody can adhere to, experiment around, make their own, and make human,” he says. Creating an effective and repeatable process lays a strong foundation for his team's day-to-day responsibilities, while still granting room for creative interpretation and personalization. 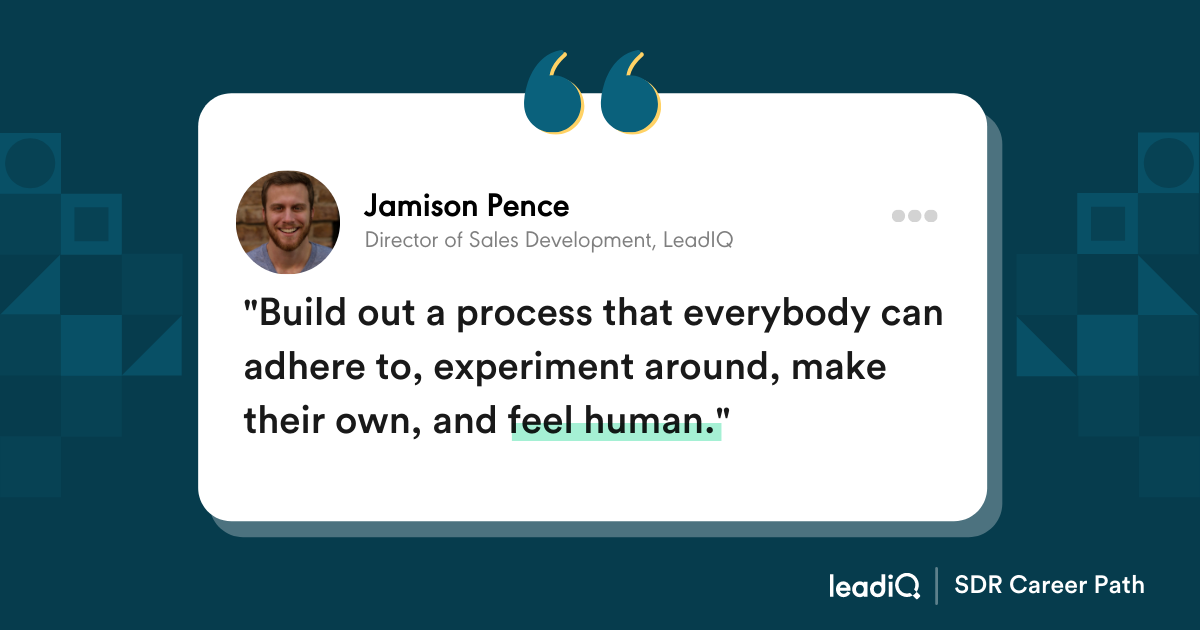 Taking ownership: Jamison found that getting organized allowed him to see what gaps there were in management and fill them. He says that “finding the areas in the business that needed to be developed further and taking the initiative to build those out, without forgetting my day-to-day responsibilities,” was the go-getter behavior necessary for earning a management position. Jamison emphasized that at the very least, any SDR who wants to make it as a manager needs to assume full responsibility for daily tasks and follow through on them.

Empathy: “You never know what people are going through,” says Jamison. Working in sales is tough, and people can have challenging personal lives outside their work. Jamison has learned to approach his team–and any pain points that arise–with empathy. By not making assumptions about where a person’s at, Jamison has learned to ask the right questions and hold a space for solving an issue together. “I work for my team,” Jamison emphasizes, and not the other way around. This approach enables effective collaboration and more positive outcomes.

Last but not least, Jamison cites good time management skills as crucial to supporting the many moving parts of a sales team. To gain more insight into this dynamic, Jamison gave us a walkthrough of his schedule.

A Day in the Life of an SDR Manager: What To Expect

A structured work schedule empowers Jamison to support his team as well as possible. While the job entails juggling multiple projects at any given time, here are the non-negotiable commitments that Jamison locks in every week:

Ensuring that the necessary activities are accounted for in the first half of the week allows Jamison to devote the rest of his time to other meetings and activities. Along the way, he uses the insights gained from that close communication (one on ones, daily team huddles) to solve any issues. For instance, when cold-calling cold feet caused one SDR to question whether she was right for the job, Jamison used their one-on-one to coach her towards leaning into her strengths–writing strong emails–to compensate. She’s now one of LeadIQ’s top-performing SDRs.

Of course, not all challenges result in a happy ending. Addressing performance issues is one of the hardest parts of the job, says Jamison. He pulls on his strengths–empathy and communication –to create a supportive dialogue for handling them. First, he examines the reps conversion rates and metrics to hone in on the issue and come to the table with a solution. Next, he pulls in the rep to suss out the exact issue and work on it together. Often times there is a knowledge gap, skill gap or a lack of effort. But sometimes if the improvement isn’t shown over time then he has to have “the difficult conversation where we’d have to part ways.” As hard as these conversations are, Jamison realizes that “generally it’s for both their benefit and ours. If someone’s struggling to see success then he’d rather help them get a position where they’d be better suited.” Jamison relies on a “culture of collaboration” to empower SDRs to be their best and minimize these hard talks.

Jamison’s Advice for SDRs on their Career Path

Whether you’re an SDR on the surefire path to a manager position, or you’re still figuring out your next moves, Jamison identified three key traits of successful SDRs.

Whether you feel confident in all three areas or have some work to do, keep in mind that improvement is always possible. Just as Jamison went from hoofing it door-to-door to successfully managing a whole team, you too can make progress–one step at a time.