On Friday, I had a phone call with a really smart sales guy, who admitted to me that he didn’t really know what it meant to do “account based prospecting".

There are tons of companies out there that talk about it. I could spout off what account based prospecting is, and I’d tell you it’s about starting on the company level with prospecting, and then attacking that company’s accounts. The problem is, a lot of companies use this term without actually showing real examples of it.

For those that have read my blogs before, even though I write about prospecting and best cold email practices, I’ve always approached prospecting like a marketer. Most marketers who have never worked in sales struggle to communicate when it comes to copywriting, making content for the website, social posts, etc. Having a background in both has really helped me excel with cold prospecting and marketing.

If I didn’t work at LeadIQ, who knows what our company’s message would look like. When I do talks, I always make fun of how companies talk about themselves by making a super “marketing jargon stuffed” description of LeadIQ to open my talk.

LeadIQ is an innovative cloud based big data solution that helps dynamically change global communication in the ever changing market using synergy through thought leadership and partnerships with the on-demand markets of lead generation.

This is pure garbage and is obviously not how we communicate LeadIQ. What’s sad though is you probably prospect companies that actually talk about themselves this way. Just go look at their LinkedIn company pages. It’s terrible.

Today I’m going to show you a few examples of account-based marketing, prospecting, and selling coming together. Given the time of the year, I’ve decided to theme these tactics around the things I’ve done, all inspired by the holidays.

Get employee introductions to your target accounts.

Twas the week of Thanksgiving back in 2012, when Kristi Mason, Director of Marketing at Dyn Inc., came to me and said, “Ryan…we need to do something cool and different for our customers, partners, and prospects for the holidays.”

It was a slow time of year, and I was mainly working on the field marketing team at Dyn. Events were dying down for the year, and prospecting was starting to slow down. I had spent some time looking on LinkedIn at some of our employees and their connections, and started to notice a lot of the new hires at well known internet companies we never successfully broke into. This wasn’t the original intent of this project. I think we just wanted to do something cool and different for the holidays.

We were trying to get our 170+ employees to not only feel involved, but be engaged in a company holiday stunt both online and offline. If we could do something employees shared, there was a possibility their network of previous employers, classmates, friends, and former colleagues would see it and become aware of Dyn.

Inspired by the fad at the time to autotune spoken words into song, we originally wanted to get every employee singing “Let It Snow” one word at a time, and then auto tune it. The problem was, after recording the video, our internal audio production expert (one of our sales reps…the wonderful and talented Justin Cohen) couldn’t get the autotune to sound clear enough because of how poorly I recorded the audio.

Needless to say, even without the autotune the 2012 Holiday Video, Justin’s spoken word music syncing in the video was still pretty cool. Here is the end product: 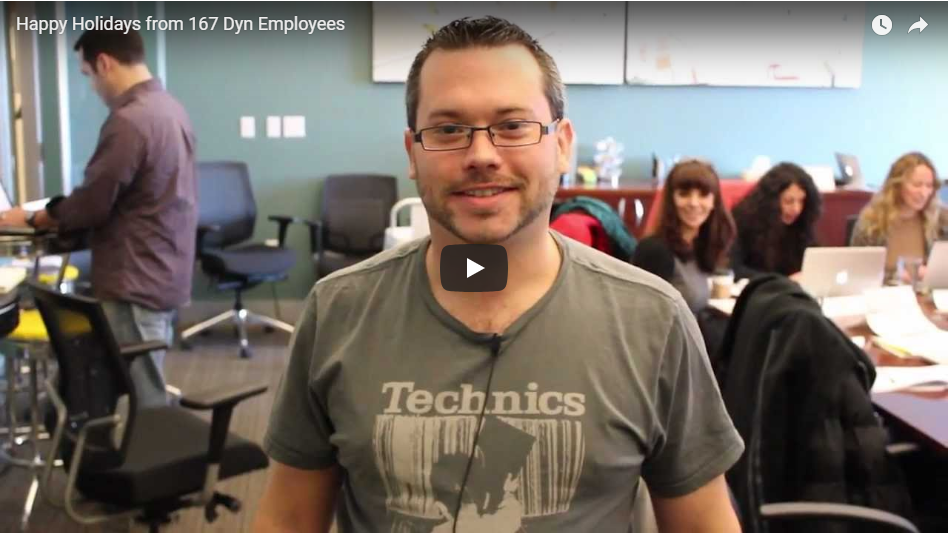 While it was challenging, I got to round up 167 employees across 3 different time zones and record them saying one lyric at a time. The video editing was super tough, but it ended up being pretty cool. Since it involved so many people at the company (we missed a few people who weren’t comfortable being on camera), everyone was excited to see it.

See if you can do something with your employees and coworkers. Take advantage of people’s willingness to say “YES” to business asks this time of year.

This 167 employee video ended up being viewed by over 7500+ people on YouTube alone, and shared by more than 90% of the participants on Twitter, Facebook, and LinkedIn.

These shares ended up converting into tons of gushing reviews online, and many inbound emails came in from LinkedIn and Facebook connections of our employees asking to learn more about Dyn.

On the prospecting side, the prospecting team brought up the video as an introduction to the people behind Dyn’s network, and it gave prospectors something to talk about that wasn’t just selling Dyn’s products. They’d go look at a coworker’s LinkedIn profile, and can ask the prospect to look for their friend in the video (note this only a happened few times but it did work).

After customer referrals, employees really are your best champions to get you introductions, especially if they don’t work in sales. It’s one of the reasons great tools like Nudge exists.

Coming off that success of the 2012 holiday stunt, my manager, Kristi Mason helped me put together an entire task force to double down on making a follow up holiday video for 2013. It involved some folks from the BDR team, sales, demand generation, HR, development, and marketing. In our brainstorm, there were a few things we made clear in our goals:

With an actual budget (keep it under $1000), and the help of my internal tasks force, we came up with an idea that checked the boxes on all 3 of these goals.

The concept: Use the holidays to impress and woo individual prospects, customers, and partners.

To execute this concept, I made a plan that was pretty elaborate, but straight forward.

We were going to rent a school bus (we wanted the bus to be yellow to push our brand color), fill it with some Dyn employees, drive to local target companies in the Boston area, and surprise them with hot cocoa and Christmas Carols (obviously the non-secular ones). To make this offline stunt more visible online, I hired a film crew to film it so we could post it and tag people’s reactions online.

We carefully picked companies that fit a strict rubric that we could get to within one day of driving. For partners, we strategically picked partners that shared a potential prospect base with. For prospects, we picked some key companies we wanted to break into. Lastly, we had a few existing customers that were really important. It ended up being a perfect combo. We also decided to try and regionalize it by visiting some known iconic spots in Boston.

In order to surprise these offices, we needed some sort of insider at each company to help us. The surprising part is, every company we asked was into the idea (we had one company say no but only because every employee works from home the day we executed this).

Long story short…here is the video we ended up posting online with some of the best reactions: 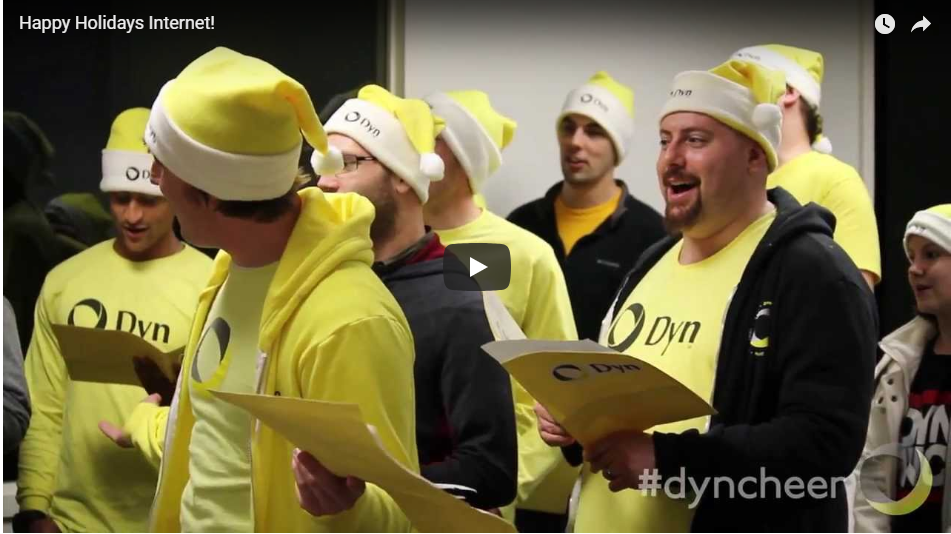 As you can imagine, picking specific accounts, and leading with with this was super well received. Not only was it one of the most shared pieces of content at that point in Dyn’s history…it also netted us well over 7500+ views on video. Since we mainly did this targeting a limited lists of accounts (and also sending it in our monthly newsletter at the campaign), many of the impressions came from the prospect’s and their respected audiences. 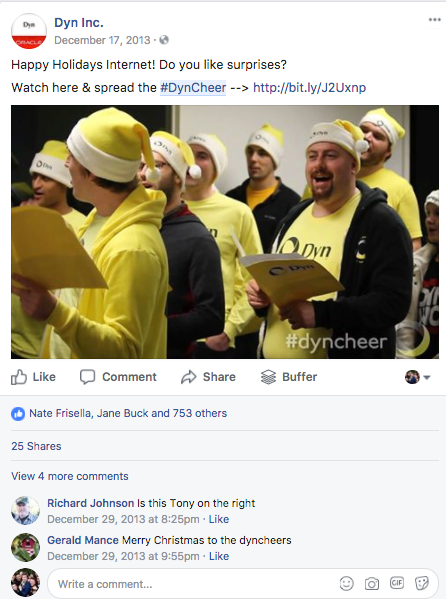 Just one of the social posts from the campaign.

We had tons of prospects and folks mention it on Twitter as well: 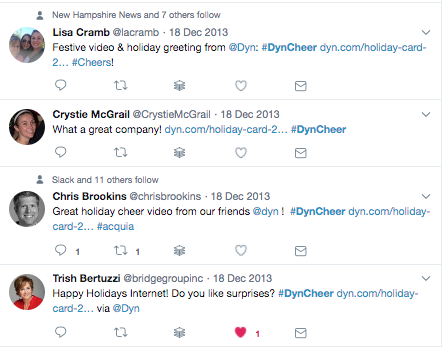 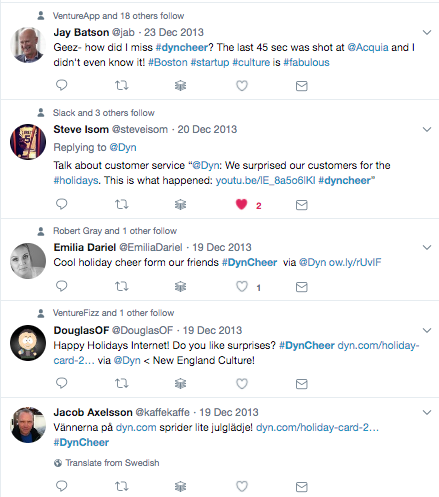 As expected, the results were fantastic. Pretty much every company we did this for had some sort of interaction with us. Some were already customers, and shared it their customer bases. Some were partners, and helped us leverage our partner relationship with them. And others were prospects who eventually bought services with us. Not bad for a back end network infrastructure provider working out New Hampshire.

Starting a personal relationship first is always the best route with prospecting. With the new out-of-office season starting shortly, the best time to do something awesome creative, fun, and different for prospects is now.

Last year at LeadIQ, we applied our account-based prospecting to surprise some customers and prospects.

Our thoughtful CEO, Mei Siauw asked me if we wanted to do anything cool for our existing customers. We decided to make a general video for all our customers. I always wanted to try and serenade prospects and customers with music. I had done something previously that worked well and booked over a 40% meeting rate. With the help of Craigslist, I was able to assemble a string quartet to play music for us. Now I just needed a webcam.

The general video was their rendition of “Chestnuts Roasting on An Open Fire.” Considering we hired a string quartet for a night worth of work, and it only took about 10 minutes to record that one song, Jim Morris, Drew Healy, and I decided to also email some key prospects and accounts with customized videos. Here’s a playlist of some of them: 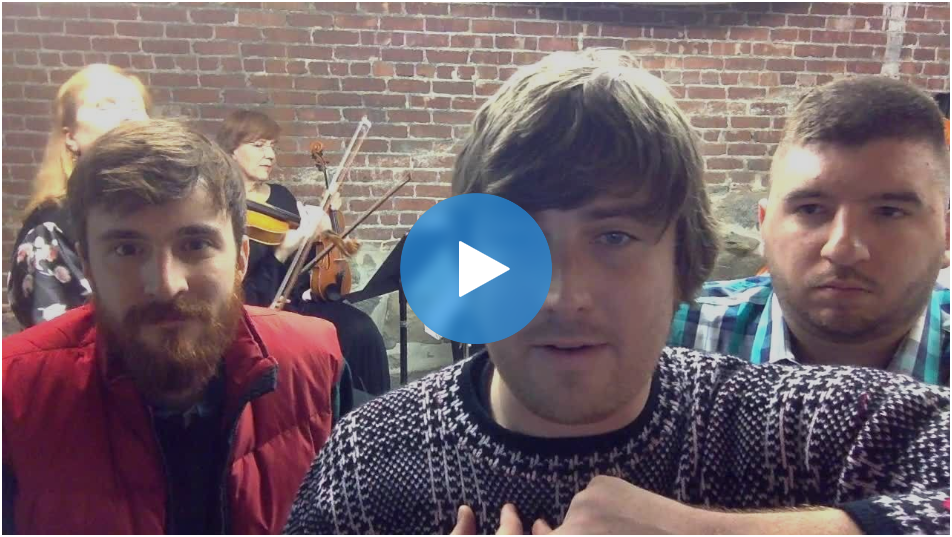 And of course… an example or two of positive results:

You need to do account-based prospecting, and it’s an important time of year to try it out since things are dying down. Use this time of year to try and do something different. Send a package on Amazon to a prospect, hire someone to perform and send it over Vidyard’s GoVideo. If you are feeling more ambitious, try something bigger like we did at Dyn. Use your talents, play guitar, sing, tell a joke…do something to stand out this.

If you want to build a campaign with some new leads, hit us up and we’ll give you some free credits.