In 2011, Aaron Ross and Marylou Tyler wrote Predictable Revenue. Since then, the book has been hailed as "The Sales Bible of Silicon Valley,” because of its ability to help teams understand how to scale and grow tech company revenue. Specifically, the book made a huge cultural impact with its ideas on how to specialize sales into different roles. Predictable Revenue suggested that companies assign Sales Development Reps or Business Development Reps to full-time prospecting, while Account Executives stay completely removed from prospecting and focus instead on closing business.

Flash forward to a decade later, and this concept is no longer considered a breakthrough. On the contrary, it should be discarded as a best practice. This blog post covers five reasons why your Account Executives should be prospecting—and why you shouldn’t get mad, but see that as a good thing.

LeadIQ polled Account Executives on LinkedIn to see how many of them are prospecting. This post has a relatively short life span, but gathered a robust enough response to share the results. Check it out: 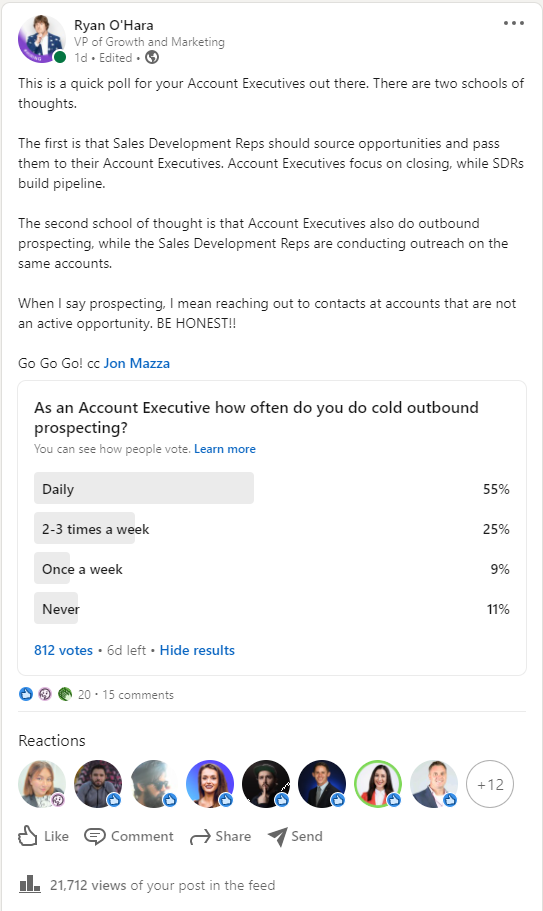 (Disclaimer: while I personally like going against the grain, this situation might not be the right one for being in the minority—no matter how catchy the old Green Day song.)

To look at this issue from yet another perspective: according to LinkedIn, Canada and the U.S. have a combined 6.45 million Account Executives and 3.25 million Sales Development Reps. The more people working to break into an account increases the opportunities to ah...well... get opportunities.

I've been working in a marketing role for almost a whole decade, so am well versed in the conversation on alignment issues with sales and marketing. Sales claims marketing isn't producing enough leads, and marketing claims sales isn't work those same leads. The truth is, even the best demand generation and marketing people in the world have limits on the number of inbound leads they can produce.

Not only is marketing limited in the number of leads they drive into the pipeline, they are also limited in their ability to get the right audience to fill out forms and raise their hands. Marketing has to create excuses for sales to work inbound, but they can't control everything or everyone. As a result, marketers and demand generation people tend to put their efforts into target ads based on email lists, IP addresses, or intent data.

But even these efforts have constraints. Take, for example, the fact that some studies have shown only 10-15% of internet users intentionally click on targeted advertisements online. There are an estimated 4 billion people online. Those 400 million (the 10%)  people clicking may sound easy to reach, but start breaking that down to your target accounts, in their correct roles, in the right region with the right intent.

The truth is, marketing has limited reach no matter how much money they spend. There is a finite amount of people that can be targeted. It's ok to cry in the shower over this.

Account Executives, however, are able to handpick the right contacts, and specifically target them with the right message in a much more detailed way than a marketer could in mass.

Marketing should support Account Executives by doing air cover with paid ads, social, and content, but the Account Executive has the human control to specifically on-demand the targeted contacts and accounts with the content they want.

Whether it's a cold email, a video, voicemail, call, or just inviting the prospect to a webinar, the best way to convert on a target account is still through outbound prospecting.

Reason #3: Your Best Sales Development Reps Usually Get Promoted to Account Executive and Are Your Best Prospectors

To better explain how the best sales development reps are also your best prospectors, I’ll use a football comparison. Keeping your Account Executive off the prospecting floor after they get promoted is a lot like only using your running back as a receiving back when they rushed for 2000 yards the year before.

NFL Hall of Fame running back Marshall Faulk was not only an amazing running back, but an incredible receiver out of the backfield.

To put this analogy into plain speak: Account Exeuctives are talented prospectors, and not utilizing their gifts regardless of their position in the company translates into a missed opportunity. While not all Sales Development Reps need to be promoted into Account Executives roles, the ones that do usually are amazing at producing as a pipeline builder. Prospecting is important for sustaining a healthy pipeline, and allows closers to not seem desperate when a deal has to push the close for one more month.

If an Account Executive has enough pipeline, they'll be more confident and helpful for the buyer, without forcing urgency, which can turn into a churning customer one year later. Deal sizes and discounting will be minimal because the Account Executive can focus their energy on another deal they self-sourced when the timelines don't line up with the forecast.

Companies spend hundreds of thousands of dollars training Sales Development Reps, buying technology that enables them to sell, and even engaging in external coaching on how to maximize chances of getting a new opportunity. Pushing the Account Executive into closing only throws away years of training and development.

With a few years of prospecting under their belt, they'll be much better at sustaining and building their own pipeline. It’s important to not let those skills die by the wayside.

Reason #4: Account Executives are in a Better Position to Ask for Referrals

Let's go through two scripts and see which one would go better on a call with a customer.

Scenario A: Hey Susie, I'm George, a Sales Development Rep over here at LeadIQ. You've been a customer of ours for about 10 months now, and I noticed on LinkedIn you are connected with John Smith. Both of you worked together at Acme. Do you think you could intro me to John Smith? We've been trying to work with his company for a few years, but don't know anyone there.

Scenario B: Hey Susie, I hope the team in Germany is enjoyed the SKO you put together last quarter. It was amazing to get a chance to show them all how to use LeadIQ. Tell Melvin I say hey! I wanted to ask you something. John Smith is someone you worked with at Acme, and I wanted to see if you could intro me to him? We've been trying to get into his company for a few years now, but don't know him personally. Do you think you can help me out?

Scenario B is always going to convert higher than Scenario A. Account Executives not only have the opportunity to form deeper relationships with customers, they also usually know more about organizations they work with. They follow triggers, news events, partnership announcements, and then add the people they are working with on LinkedIn.

This gives them an advantage over sales development reps. There are tons of best practices for asking for a referral, but one of the easiest is to have regular contact with your customers so it’s less awkward to just ask for a referral. Sales Development Reps are usually moving onto the next account after the hand-off, meaning Account Executives are the ones best poised to make this move.

Reason #5: Account Executives are in a Better Position to Brand Build

At LeadIQ, we always talk about the importance of brand building, and how Sales Development Reps and Account Executives can build a pipeline for their pipeline by posting content regularly on LinkedIn. Well, one of the hardest things to do is come up with content your customers care about.

For example, an Account Executive selling to security software shouldn’t be putting content out online about sales. That doesn’t make sense, right? Instead, Account Executive can usually source and come up with ideas for posts on social media based on conversations they have during their deal cycle. They can even post things including influencers in their buying teams on deals.

Video: How to prospect the likes and engagements off LinkedIn with LeadIQ

By now, you should have a good understanding of the five reasons Account Executives should be prospecting. At the end of the day, sellers need to sell. Waiting for people to come to them is a waste of time, talent, and opportunity. If you would like to learn more about how to shift your team into having Account Executives prospect, contact us at support@leadiq.com, and we’ll share our expert advice and best practices.