Being first to market is always great. Throughout business history, though, it is the 2nd or 3rd companies that come to market that prevail. Sometimes it may even be the 15th-20th company in that space that ends up as the market leader. This often happens because they can look at what the current market leader is doing and do some crazy ninja stuff to be better and beat them out of the top.

No one knows why these two are flipping, but they are ninjas, so the image clearly makes sense.

There is absolutely no reason for it.

The classic example everyone always references is Netflix taking on Blockbuster. Blockbuster rented hard copies of movies by customers physically going to their store and purchasing. If you failed to bring them back within 48 hours, you had to pay a late fee. Netflix eliminated the need to drive to their store by doing everything over the mail and using the internet to let people handpick what movies they wanted to be delivered to their house. This modification may seem minor but is the most significant innovation by simply allowing Netflix users to pay a monthly fee and only allowing them to get their next movie by returning the one they had.

We all know how it ended up for Netflix long term. Today, over 73 million Americans have a Netflix account. Blockbuster is a fossil. There are hundreds of stories of companies coming later in the market and winning. Friendster got destroyed by Myspace, Myspace got destroyed by Facebook, and my new fake red hot startup MySpacebook will crush them all in 10 years.

The point is, there is always going to be competition. It’s what makes things great for both businesses and customers. We push each other to get better, and as a result, customers get better products and services.

Pitching to Your Competitors Customers

"I don’t get it." "What are most prospectors doing wrong?"

The first way to solve a problem is to admit that we have a problem. For years, I prospected the wrong way when dealing with competitors’ customers. Sure, I had my occasional run-ins with good luck, but generally speaking, I regret how I handled things in my early days as a prospector.

Here’s a little back story. While previously working at Dyn, we were the 3rd managed enterprise DNS provider in the space back in 2009-2010. Akamai had bundled in DNS services right into their Content Delivery Network Service, tackling many of the enterprise customers, but our biggest competitor was a company called UltraDNS.

As we called it, Ultra was the first significant enterprise DNS provider, and they had all the major websites (traffic-wise) using them. Companies like Facebook, LinkedIn, Netflix, and Amazon were all using them, and we wanted them to become customers so badly. I made lots of mistakes, so I thought I’d go through some of them.

Stop Talking About Yourselves Too Much

One of the best parts about selling to a competitor’s customer is they’ve already been educated on the value of what you do. The issue is, the trigger of reaching to someone because they are using a competitor doesn’t mean you should make your email mostly about your product or service and how you are better. You still need to focus on your prospect.

Check out this email I wrote below:

I like the opening James Bond stuff, but after that, this email takes a real nosedive. It’s because I made assumptions that my value prop was solid enough to get this person to take a meeting with me. They didn’t, and it’s no wonder I eventually got the “NOT INTERESTED” from them.

Take a look at all the parts that are about my competitor (in pink) and me. Those underlined in lime green are sentences I liked:

When you are writing an email trying to score a meeting with your competitor’s customers, you need to make the email mostly about your prospect. Don’t forget we want to make our prospecting entertaining for the prospect.

Tip: Try personalized video prospecting. You can show the prospect a lot more in a short amount of time while connecting on a more personable level.

One approach is knowing that a customer uses a competitor and holding off on telling them you know it as the first step in your cold email. I sometimes save this as an email or call later on in a cadence.

Here’s an email I wrote to a really large company in the marketing space knowing they were using a competitor:

This email is entertaining, talks about the company to open up, but transitions right into a quick pitch. Notice the lime green underlined sentence. In this email, I positioned one of our competitor’s biggest flaws (the difficulty it takes to add new records into Salesforce) and made our strength over them as our value prop. I wanted the prospect to respond and start a conversation about the competitor, so it seems more consultative than pitchy.

And of course, check out the prospect’s response:

In the old days, I probably would have positioned how we were better than our competition in the first cold email. I’ve done with some success as well when it comes to responses. However, I noticed the responses rarely turned into a solid opportunity when we ignored the core principles of writing a good cold email.

Keep in mind, the decision-maker you a prospecting may have already picked your competitor. This means always to take the high road and try not to bash the competition openly. Being on the buying side now, I now understand things a little differently than I used to. When you sell against your competition in a cold email, this is what you risk your prospect feeling even though it isn’t what you mean: 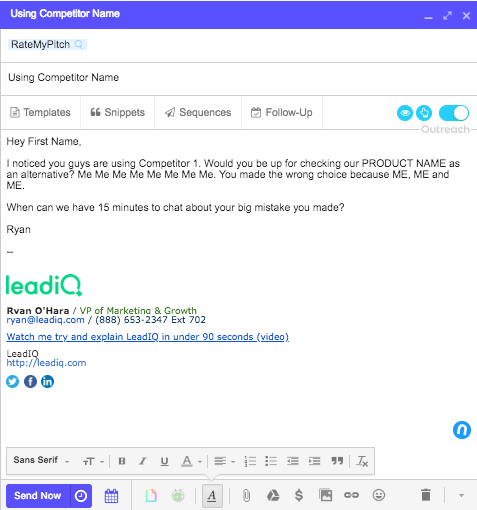 Remember, when you bash your competition, you risk bashing the decision-maker.

Now that I get prospected by companies all the time, I find myself wanting to defend my vendor decisions. Your prospects are going through this as well. I’m not a full-time decider on vendors, but imaging if I was a CIO, VP, Director of IT, or Operations. At a large enough company, some employees manage vendors and their relationships full time.

Remember, many of the decision-makers and leaders out there are builders. Whether it’s a team, revenue, a company, or a network, we are all creating. It hurts having our creations criticized, especially from a stranger sales development rep I’ve never met. They take pride in their work and don’t want to be insulted for what they’ve built. 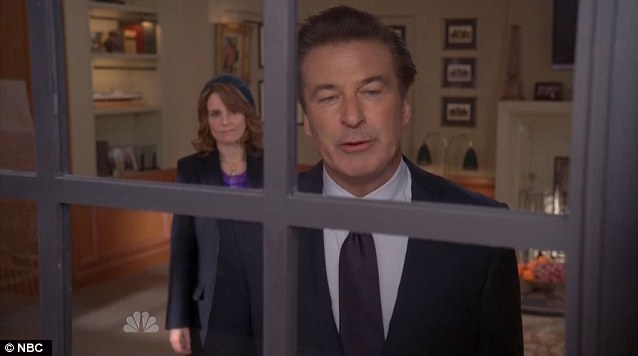 Look at my colony Lemon!

How To Bring Up Their Competitors

Talking with sales prospecting teams and going through my own experience, the tried and true best way to approach a competitor's customer or prospect is to let them deduce you should replace them. Imply things without pointing out flaws in your competition. Focus on your strengths as they relate to the prospect. Remember, over a cold email, cold call, or social; you have no trust because you have skin in the game. This means letting others sell the product or service for you.

If you are writing a cold email, tell a story of a customer who was going through a similar experience with a competitor. Alex Goldfyn recently said on an episode of The Prospecting Podcast that storytelling is the key to handling and dealing with objections. When someone is using a competitor, they have a preconceived and valuable objection before you even reach out.

So tell a story comparing an existing win that's similar to the prospective account, and relate it to how they decided to switch to you as an alternative. Remember you still want to make the email about your prospect.

For example, suppose I was going after a company that targeted people who run sales and marketing, who was using another provider for data provider.

In that case, I can write an email like this: 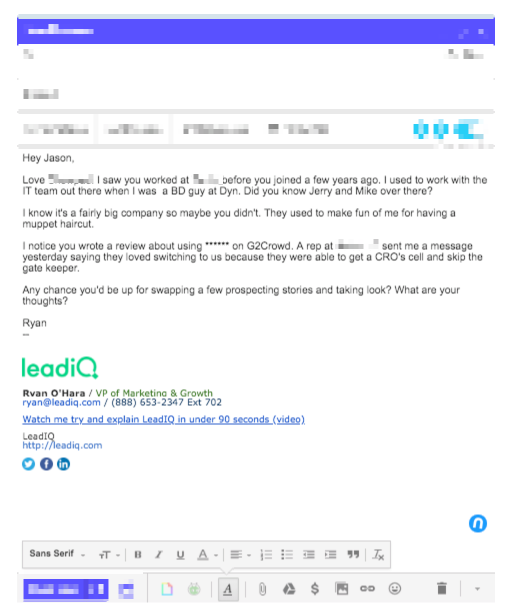 This email is on the longer side, but I can tell a story to help the prospect deduce the pain without insulting them for picking another vendor. Telling stories is the best way to guide them through this journey since it’s letting someone else share their pain. I have skin the game, so there is a barrier to trust.

If you do this, you can avoid looking like an asshole while prospecting your competitors and come away looking like someone who sincerely cares about the prospect. It also shows you personalized your approach to reaching out.

If you try these things, you should produce more output with your cold emails and build stronger relationships with your prospects.