After talking with many sales leaders and other heads of sales over the past year, many of them sadly have the same sales structure in their heads. They believe that their Sales Development Reps are solely responsible for prospecting and that their Account Executives (AEs) need to focus on closing business.

However, we believe that the best sales leaders are the ones that push everyone on your revenue team to prospect leads constantly. To be proactive, not reactive.

“Prospecting isn't just for SDRs. The most affluent sales folk I know attribute their success to fanatical prospecting.

It's a lot like working out or eating well - it takes discipline and mental toughness to build habits that create long-term results.

AEs/Execs/Leadership/Management should definitely be in the trenches prospecting too.”

If your AEs are struggling to fill their pipeline, they simply can’t do their job, and they definitely will not hit their quotas. So why aren’t AE’s prospecting? Think about how much revenue your company could drive if you keep your entire team focused and constantly push to bring in more leads.

To avoid having a dry pipeline, the bulk of your day as an AE should be spent on prospecting. Whether it’s cold calling and emailing, utilizing social, or asking for referrals, you need to squeeze the time in.

How to Make Time to Prospect

After discussing what works best for AEs when trying to make time for prospecting, timeboxing was a popular answer. Along with setting goals for hitting certain call numbers, emails per day, etc.

Kyle Racki, Co-Founder & CEO of Proposify, has his sales teams using the time blocking method. They're also making sure that they leave specific times of day when people are more likely to answer free. For example, 5:00 PM is probably a good time for many people because they're already wrapping up their day; a technique most SDRs are used to doing. And then for the times of day that aren't ideal times to reach out, his AEs are building their lists, updating their CRM, etc.

Then there are AEs like Jeremy Leveille that don’t time block and look at their days a bit differently. He shares that he isn’t the most organized in planning out his day with set schedules and time blocks, but he knows his days consist of 3 things. 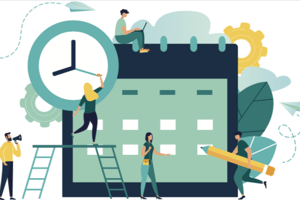 First, he looks at and completes calls that are scheduled on his calendar. These are calls that are either an initial first call demo with a prospect, or it's a follow-up call, and these will usually take up 2-3 hours of his day. For the rest of his day, he is doing one of two things. One is prospecting to add new leads into his funnel and add new pipeline. Second is simply following up with deals that are already in the pipeline but not on his calendar. For example, people he doesn’t have calls on the calendar with but already showed demos to, he will now reach out to get those next steps figured out.

Another tip, if you find yourself running short on time day after day for prospecting, try to pick five accounts at a time to go after. Have certain triggers that let you know that they're a good fit. This is a very targeted, strategic approach - quality over quantity. Ditch hitting up 100 people by blasting out template emails.

How to Create more Pipeline

We hear it all the time, "I need to build more pipeline," "I'm struggling," "I'm not going to hit quota." If you get in the prospecting first mentality, it can actually impact the deals you have in your pipeline.

An example of this is from one of the reps on our team, Annie Roche; after she does a discovery call with someone, she will start roping in other people if it goes well. She doesn't just accept that she has one or two people in that deal. Annie will actually ask that person if she can reach out to someone else that hasn't been introduced and prospect them. Just because you created the opp doesn't mean your prospecting is done on that account.

“If you have a fat enough pipeline, then when you lose those deals, it doesn't matter as much.”

Being in a desperate state to fill your pipeline and fill it quickly is a tough situation to be in. Referrals play a huge role for AEs to build pipeline, but you can also do other things. Let’s go over each.

Asking for Referrals from Previous Companies and Competitors

Figuring out the best way for you to ask for a referral can be tricky.

Let's pretend you close someone at X company that was experiencing certain problems. For example, maybe they're having problems with sending contracts or tracking the progress of proposals that they’re sending. If the person at X company wasn't aware of your company before you prospected them, there's a pretty good chance that the company they worked at before didn't know about you either and experienced the same problem.

After closing someone, you should hop on their LinkedIn profile and find out where they worked previously, and go after that company if it’s a fit. You could also ask the person you just closed before you do this if you could mention them. Always ask first if you plan on mentioning them.

An example that worked from Jeremy, after closing a company, he looked at the two previous companies that the individual worked at, confirmed that they were a fit, and then reached out to the person he just closed and said, "Hey, do you think either of those might be a good fit? You used to be at XYZ and ABC company." This started the conversation on the right track for Jeremy to ask if he could mention the person.

Another way to build your pipeline is to look into the account you just closed competitors. Many AEs recommended Owler to do this. After you close somebody, pop open Owler, type that company in the search box, and it will give you their top 10 competitors. Now you have a list of accounts to go after. You could start your outreach with an intro like,

“Hey [First Name],
Your top competitor X just signed with us.
Here are the results they've been getting... Figured you'd want to check us out, so you're not missing out."

People don't want to be missing out when their competitors are doing something that they're not when they're see success from it.

One of the most successful ways to build your pipeline is by providing value to prospects. This goes back to the basics of being an SDR, but with a different approach.

"If you don't add enough value in the conversation, then the client sees no reason to continue through the process."

As an AE, you're listening and talking to prospects/customers all day long. If they’re telling you about problems they’re facing, in business or personally, listen. Give your prospects/customers value when you reach out to them. Don’t just send them the white paper in your normal sequence that has nothing to do with their current problem. That's not adding value. You add value to them by actually helping.

Try to connect on LinkedIn with each person that is involved in the deal you’re working. They're more likely not to ghost you on the deal because if you're active on LinkedIn and they see your activity every week, you're staying top of mind with all of your prospects every time you post something without you necessarily having to call or email them.

"Hey [First Name], it was great talking to you today. I sent you a follow-up email just now. Did you receive it? Jeremy"

By doing this, it actually starts a dialog. It's not just sending a connection request, they accept, then that's it no conversation anymore. With email and spam filters, you can never be positive they’ll see your email. If they don’t, they're never going to respond to you, and then it won’t go anywhere. This is a way to make sure you get your prospects attention.

Another tip: You can also tag your prospects in posts that offer solutions or insights to problems they’re facing or mention them in your posts. Incorporating social media can have a huge impact on breaking into accounts.

Like I said above, as an AE, you're listening and talking to prospects/customers all day long. You’re hearing problems and understanding institutional knowledge. If things happen during the day that are reoccurring, maybe an objection or a common problem or even just an interesting story, make a post about it on LinkedIn. Anonymize it or tag the prospect if you have their permission. Start conversations; you can even work off all the people that engage with those posts.

LinkedIn is such a powerful tool for salespeople. If you’re an AE and need an easy way to build pipeline, put a post up on LinkedIn at the beginning of the week. Let engagements on your post collect for the week and then in the beginning of the next week, push those people to your CRM and prospect them. The personalization piece of your cold email could be something like,

I saw you liked my post where I posted about how to overturn X objection."

Building pipeline as an Account Executive isn't always easy. You have a lot of responsibilities on your plate, prospecting just might not be your top priority. It's time to make it one.

Find a schedule that works for you, whether it's time-blocking or checklists. Start more conversations, ask for referrals, utilize social media, create content that addresses pain points. Provide value to your prospects/customers. Build your relationships based on more than just contracts.