A few months back, I wrote a blog post about why your sales team is missing out if you aren’t buying LinkedIn Sales Navigator. I’ve had lots of great discussions with folks in sales teams debating if my reasons for buying it are the best features, but one of the biggest criticisms I received was that I simply glossed over having the power of InMail at your disposal. This post is all about how to leverage InMail more effectively to book more meetings and reach prospects

Before we get started, let’s remember a few basic things about using InMail:

1. If you work on a sales team, and have a LinkedIn Sales Navigator account, you can send messages to people you aren’t connected with.

2. These messages get labeled as “InMail.” InMails are clearly marked as being “inMail” when prospects receive them. They also go into a special inbox once they’ve been read.

3. LinkedIn is smart enough to push back a few auto-responses for a prospect, making replying easy.

4. By default, email alerts are on for InMail when your prospects have an account, so they will see them in their email inbox as well. However, remember many LinkedIn Members who don’t work in sales have their personal emails associate with their LinkedIn (like me for example).

6. Lastly, remember prospects expect InMail to be a sales email. Just keep this in mind.

So, with these basic things brought up, let’s get into the weeds on how you can use InMail to book more sales meetings!

We all have a tendency to use new technology the same way we used old technology. InMail’s purpose can be to break in when you don’t have contact info, or to promote a tactic your tried over a different medium. In the message below, our BDR Jeremy Leveille was prospecting a Zoominfo customer and decided to try pushing a different value prop in his SalesLoft cadence using InMail instead of email.

Goodwin did jump into the pitch a little bit, but the creativity and personalization sparked a conversation about sports vs. the product and got a response.

Sure he could keep hammering his prospect over email, but switching to InMail for one of those steps helped him stand out, puts his social brand front and center, while kicking off the conversation:

Just like cold calling and cold emailing shouldn’t be the only media you use for prospecting InMail can be a third piece of the puzzle. Catch your prospects off guard by staggering one of your value props into an InMail instead of shooting off a bunch of bullets in one email. Now your prospect doesn’t have to read a giant wall of text with 10 bullets on it since you can split them into multiple messages over email and InMail. Jeremy knew this person used ZoomInfo, and lead with that value prop for this touchpoint.

Tip #2: Still talk like a human being over InMail.

I get bombarded with InMails, and if I responded to all of them, I’d have no time in my day to do my normal job. Talk like a human being, and maybe just maybe, you’ll get a response.

If someone takes the time to personalize their message and talk to me like a human, I’ll treat them like human beings. Here’s a message where the sales rep failed to connect with me as a human: 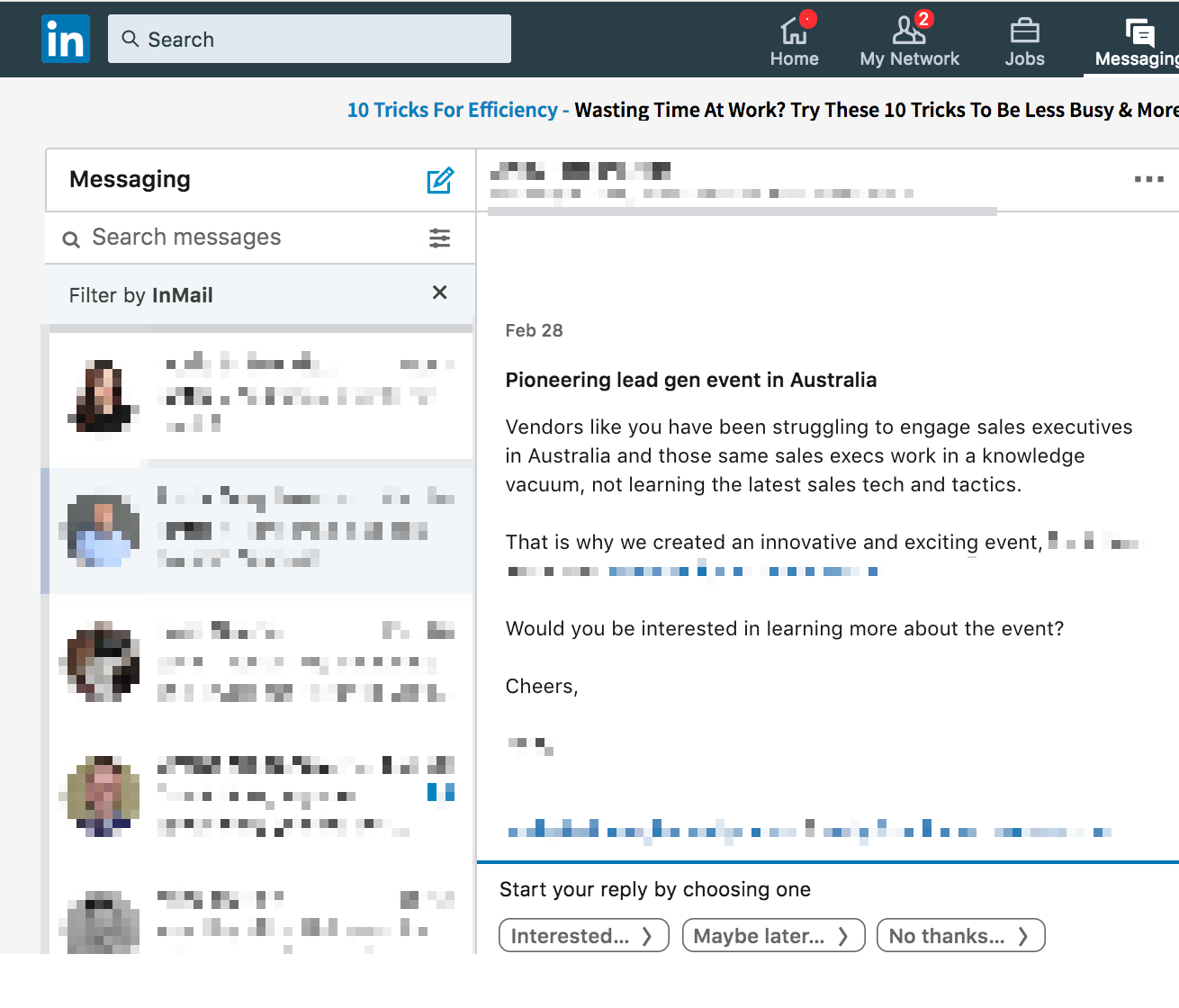 I’m not a bunch of 0s and 1s sales rep. I’m not a machine! I’m human! I laugh, I get angry, maybe once in a while I’ll shed a tear or two (fair question: don’t we all cry in the shower?). This rep completely failed to get a connection with me because they sent a template. The power behind LinkedIn is that you have tons of triggers you can bring up when you prospect.

Here’s a message one of our BDRs, Shelbie Blevins wrote to a prospect knowing that our Account Executive, Annie Roche ran into this person at an event: 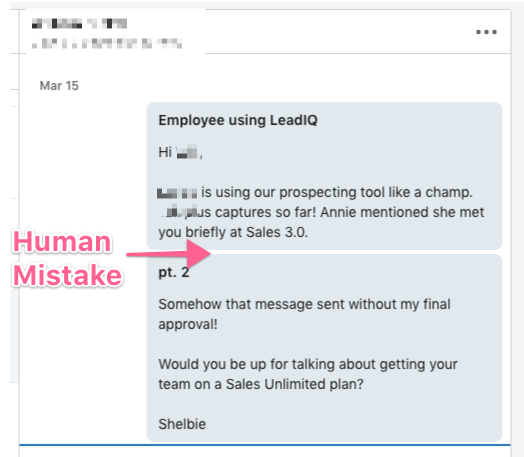 It may seem like a small thing here, but Shelbie talked to this person like they are a person. Not a CEO, not a company, but a human being. I also love that she made a mistake and hit enter too early, and just made a little quick-witted joke. She didn’t blindly send a message ignoring triggers. She brought up their reps usage and gave some valuable info in a way that wasn’t automated. Be human. You are selling to a human, not a company.

Do you think you think she got a response? Of course, she did:

Tip #3: Use triggers to send InMail

I talk about triggers in this video. LinkedIn is a perfect place to find them. Triggers are explained in this video if you are new to the concept:

Can you find a reason to reach out to your prospect clearly in the inMail?

Even with connection requests, you should use triggers. Did you see a video I made? Do you see my comment on someone else’s post? Did you see I was hiring for a specific position? Did you like one of my posts? Any of these triggers can complete the cycle of social selling.

Sorry, I know these aren’t InMail, but having several mutual connections is not an acceptable reason to add someone. You have to be more specific and work a little harder. Check out these connection request I got around the same time last week:

A good message on LinkedIn combines triggers, a human tone, and personalization. You’ll get wayyyyyy more responses this way.

Adam Weitzman from LinkedIn sent me an example of InMail getting him an opportunity because he used a trigger of a job change:

Adam was able to get a response because of the trigger:

Tip #4: Don’t send InMail right after your prospect’s been featured in a press release, funding announcements, in other content.

This may sound like the opposite of the last time, but let me explain.

What’s interesting about receiving InMail is that it often comes in gobs and clusters. What this means is that I often get groups of InMails on similar days or times. My guess is this is when I’m featured on another company’s content. Maybe as a VP of Marketing, I’m on someone’s podcast or mentioned in an article, etc. Your prospects may have a similar situation happen to them. CEOs, CTOs, and other executives are often featured outside of the company.

Maybe they just made a LinkedIn post that’s getting some shares and comments. The point is, use triggers, but if you are going to use InMail, pocket the trigger they were mentioned in and wait a couple of days. It can be too overwhelming for some of the top executives out there to respond to every funding announcement, new blog post message, promotions, etc.

When cold emailing first got traction, the big thing was companies emailing phone scripts like text over email. It was really bad, and it ultimately leads to cold emailing becoming less and less effective over time.

One thing that we have an opportunity to do as sales reps are to treat InMail almost like a new platform. Can it be used similar to a chat conversation? Can we send videos, links, shorter messages almost like a proactive instant message? I’m going to try this next as an experiment. We know chat works on the inbound side, so why not experiment with treating InMail like this.

The door is wide open for it. Studies show when you do something that is unexpected and different, that it makes people stop. Can you make your prospects stop what they are doing and respond?

Here’s a perfect example. Jeremy Leveille on our team sent an InMail to prospect, and in the InMail, he included a video: 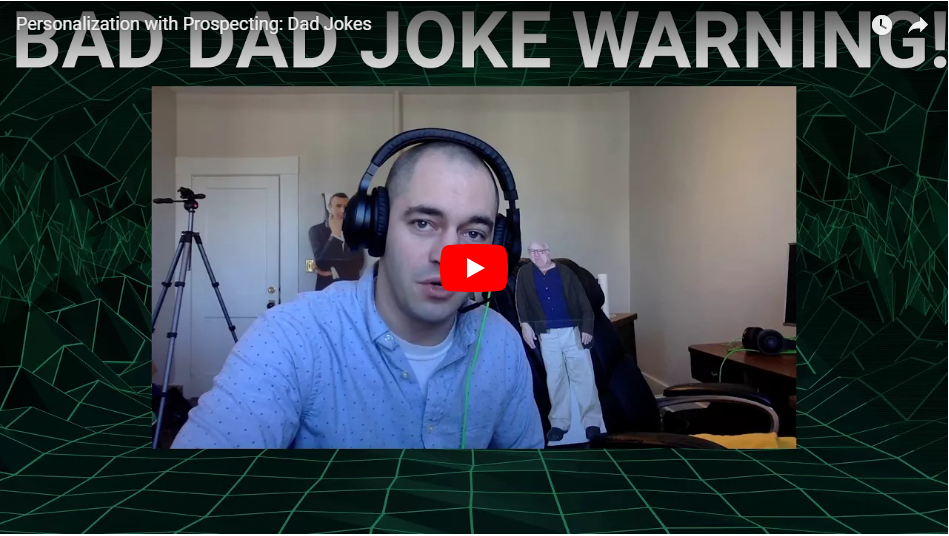 The prospect loved his message so much, he posted about it on LinkedIn after:

Let’s be pioneers, and change the way people think about sales reps prospecting. Let’s make them enjoy it. Let’s make them feel good to be prospected, and make InMail an enjoyable place to look for our prospects.